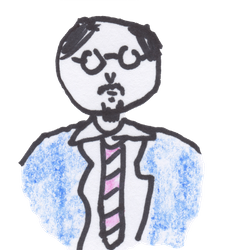 H. Peter Steeves, Ph.D., is Professor of Philosophy and Director of the Humanities Center at DePaul University, Chicago, IL, USA. He received his Ph.D. in philosophy from Indiana University (1995), and he specializes in phenomenology, ethics, aesthetics, and philosophy of science.

Steeves is the author of nine books, including: Founding Community: A Phenomenological-Ethical Inquiry (Kluwer, 1998); The Things Themselves: Phenomenology and the Return to the Everyday (SUNY Press, 2006); Animal Others: On Ethics, Ontology, and Animal Life (editor, SUNY Press, 1999); Beautiful, Bright, and Blinding: Phenomenological Aesthetics and the Life of Art (SUNY P, 2017); and Being and Showtime (Sawbuck Books, 2020).  He has published more than 140 book chapters and journal articles and has presented more than 200 public and academic professional lectures.

Steeves has been a Presidential Scholar and recipient of the United States Presidential Medallion from Pres. Ronald Reagan in the White House rose garden (1984), a recipient of the National Society of Arts and Letters’ award for literature (Indiana, 1990), a Princeton Historical Center Seminar Fellow (1998), a Senior Fulbright Fellow (Venezuela, 1998-1999), a DePaul Humanities Center Fellow (2001-02), a National Endowment for the Humanities “Enduring Questions” grant recipient (2012-14), a Visiting Scholar at Stanford University’s Center for Latin American Studies (2005), and a recipient of both Indiana University’s and DePaul University’s Excellence in Teaching Award.  He holds the position of permanent Visiting Professor of Philosophy and Law at the University of Zulia (Venezuela) and sits on the editorial board of several academic journals.

In 2011, Rate My Professor—an on-line professor rating site for students—announced that based on their research culled from more than 1,500,000 professors in their database, Steeves was one of the “Top 15 Best Professors in the United States.”

Outside the university, Steeves has been involved as a member of and a consultant to various bioethics hospital committees, has worked with international election observers in Latin America, and has been interviewed by and appeared on CNN, the BBC, Australian Radio National, NPR, The Toronto Star, The Daily Herald, The Management Report, The L.A. Times and several other newspapers and media outlets in North and South America.

Steeves has also held several positions in the arts, including Visiting Installation Artist (Chicago Sculpture Works; 2008-10), Playwright in Residence (DePaul Humanities Center; 2009-10), and staff cartoonist (Oak Leaves newspaper, 1985-89).  His artwork has been featured in such venues as The Chicago Cultural Center’s annual juried “Site Unseen” installation art exhibit (2008) and the DePaul Art Museum (2013).  He continues to produce and perform “lecture-performances”—scholarly lectures that also include performative elements such as live music, dance, theatre, magic, general spectacle, and audience participation.  His lecture-performances have been commissioned by museums, cities, colleges, and universities worldwide.

Steeves has been a member of an astrobiology research group at NASA Ames Research Center.  His current work focuses primarily on cosmology and astrobiology—on the origin events of both the universe and life—and on blowing minds and melting faces with the power of rock.