As will become clear if you read chapter one of the book, I am a huge fan of rocks.  In some ways, that chapter of Being and Showtime is an attempt to found an ethic for rocks—a sort of environmental ethic I have been working on since 1999 when I first started doing "rock phenomenology."

Rocks.  I really and truly love them.

To a lesser extent, I'm also a fan of the German grapheme, ß (the Eszett), which stands for "ss."  It's only used in the German language and it's the only letter in the German alphabet that is not part of the root Latin alphabet.  (Fun fact: did you know that you can't substitute every "ss" with an "ß" in German?  Germans are famous for making up new words by sticking other words together endlessly; if the compound word suddenly has "ss" in it because each "s" was in one of the previously separate words, you can't just write an ß and call it a day!)

When you saw the Dark Lodge doppelgänger version of "Being and Showtime"...

...did you maybe think that the "B" in the last word was an "ß" and that the word was actually "gniess"?  Did you then switch up the "i" and "e" in your mind and read it as "gneiss"?  Well, welcome to my rocky world!

"Gneiss" has been around in English for about 270 years, coming to us from the German word, "Gneiß," meaning "spark" (coming from "Gneist" in Middle High German).  In English, gneiss is a glittery rock.  It's a metamorphic rock with banding, in fact. In general, there are two types: gneiss rocks that come from granite and those that come from sandstone when those substances are exposed to high temperatures and very high pressures. 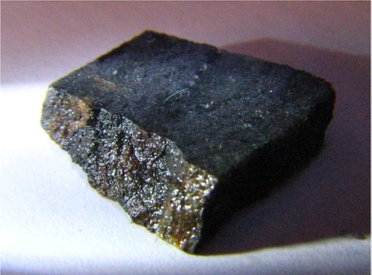 Anywho....  Here is a photo of one of the rocks I talk about in the book.  It's from my personal collection: a microslice from a rock collected in the Nuvvuagittuq Greenstone Belt.  Why do I love it?  Well, honestly, what's not to love?  I mean, look at it?  That's a handsome rock right there!  That rock's got it going on!  But on top of its natural charm, it is also 3.8 billion years old and it might contain the tell-tale signs of the oldest life on Earth—something that helps point us toward the origin of life on this planet, even.  It's an incredibly important piece of scientific evidence for astrobiologists and pre-biotic chemists.  Plus, it just exudes awesomeness in general, doesn't it?

Hint: This isn't the only super-secret hidden page on this website