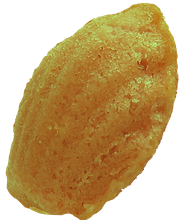 You have discovered the secret madeleine page! Yum!  Madeleines figure in chapter 6 of Being and Showtime.  You can even smell them in the book thanks to the scratch-and-sniff element on page 199.

Edwardian ghosts pass out madeleines to the audience members at "The About Time Show" in this video clip that is exclusive to the beingandshowtime.com website!

Remembrance of Things Past

Many years had elapsed during which nothing of Combray, save what was comprised in the theatre and the drama of my going to bed there, had any existence for me, when one day in winter, as I came home, my mother, seeing that I was cold, offered me some tea, a thing I did not ordinarily take. I declined at first, and then, for no particular reason, changed my mind. She sent out for one of those short, plump little cakes called 'petites madeleines,' which look as though they had been moulded in the fluted scallop of a pilgrim's shell. And soon, mechanically, weary after a dull day with the prospect of a depressing morrow, I raised to my lips a spoonful of the tea in which I had soaked a morsel of the cake. No sooner had the warm liquid, and the crumbs with it, touched my palate, a shudder ran through my whole body, and I stopped, intent upon the extraordinary changes that were taking place. An exquisite pleasure had invaded my senses, but individual, detached, with no suggestion of its origin. And at once the vicissitudes of life had become indifferent to me, its disasters innocuous, its brevity illusory—this new sensation having had on me the effect which love has of filling me with a precious essence; or rather this essence was not in me, it was myself. I had ceased now to feel mediocre, accidental, mortal. Whence could it have come to me, this all-powerful joy? I was conscious that it was connected with the taste of tea and cake, but that it infinitely transcended those savours, could not, indeed, be of the same nature as theirs. Whence did it come? What did it signify? How could I seize upon and define it? 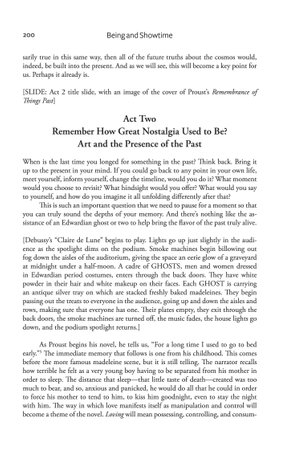 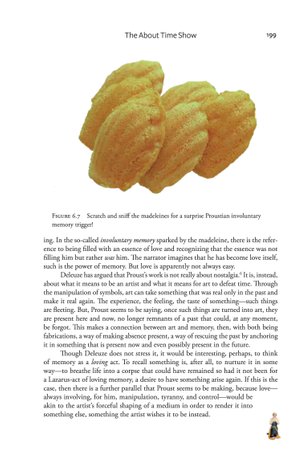 Mix flour, baking powder, and salt in a bowl.  In a separate bowl beat eggs, white sugar, and brown sugar for about 6 minutes.  Add vanilla and lemon zest to egg/sugar mixture, mixing well.  Fold the flour mixture into the egg mixture by thirds being careful not to overmix.  Melt the butter in pan or microwave. Fold the melted butter carefully into the main mixture: don't deflate!  Cover with cling-wrap and refrigerator overnight or for at least three hours.

Preheat oven to 375F.  Grease and flour madeleine pan molds (24 count). Place pans in refrigerator for at least 20 minutes.  Drop the batter into the chilled molds, one tablespoon per each mold.  Do not spread out the batter—leaving it in a single mound in the center will allow it to spread out while baking and still create a traditional, thick center to the cake.

Bake for about 10 minutes, checking for when the edges are turning a golden brown and cake is springy to the touch.  Remove madeleines from pans and cool on a wire rack. 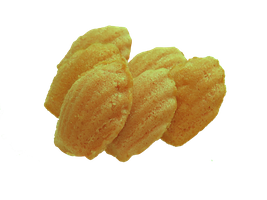 Hint: This isn't the only super-secret hidden page on this website

When you see me again, it won't be me. Follow the question marks....