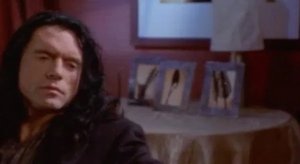 Sometimes, art may require you to throw 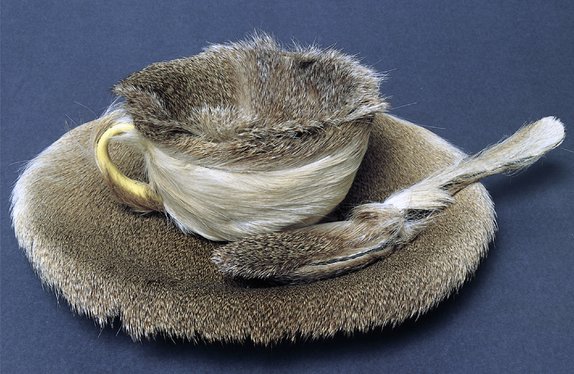 Uri Geller came to prominence in the 1970s claiming he could bend spoons with his mind.

But it did inspire the best opening line to any song on an album from the year 1994—and I will defend that claim to my death. 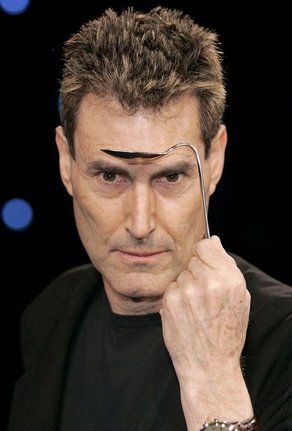 Meret Oppenheim. Object, 1936. Fur-covered 8" spoon (along with a fur-covered cup and saucer that are less interesting), The Museum of Modern Art.

Yep, the second law of thermodynamics is the answer.  It's the answer to so many questions in life—questions about spoons and even other things. 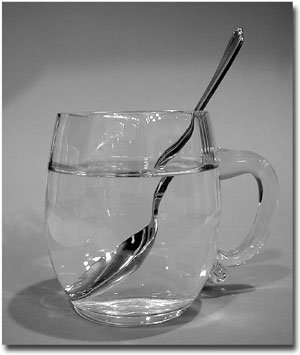 Why does a spoon appear bent in water?

The scientific answer is that light travels at different speeds through different media. Surface refraction is taking place here.  Refraction is what happens when the direction of a wave is changed due to a change in its speed.  Since light is a wave, and it slows down in water, its direction changes.  Everything looks fine above the water, right?  And everything's fine below?  It's just that at the boundary between the air and the water, the speed of the light changes, the direction of the light changes, and thus the light "bends."  (Actually, there are multiple changes in this photo since the light is passing through air, water, and glass.)

WHO INVENTED THE SPOON?

What a silly question.  We do know, though, that spoons were being used in Ancient Egypt and the modern shape of the spoon came into fashion in the mid-1700s.

The spoons to the right are carved from reindeer antlers.  They were made about 17,000 years ago.  Wow.

The spoon doesn't look bent at all.  That is exactly how a straight spoon should look when part of it is under water.  That's straight-up phenomenology!

argues, building on the

we should not lament

the fact that our eyes

and the world are like this.  I do not see the spoon "despite" the air and water, but rather "I see it through them and because of them."  L'oeil et l'esprit (Paris: Gallimard, 1964.) 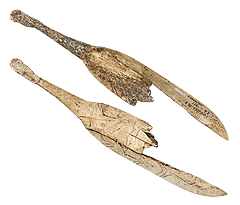 WHY DO PEOPLE COLLECT SPOONS?

Gosh, you're just full of questions, aren't you?  Well, collecting souvenir spoons was big in Europe in the mid-to-late-1800s.  And then it caught on in the U.S., too, such that by the start of the 1893 Chicago World Fair, historians say we were smack dab in the heart of "The Golden Age of Souvenir Spoon Collecting."  Why do people do it?  Who knows?  Nature, nuture, a little from column A, a little from column B.  I'm gonna say it has something to do with nostalgia, capitalism, and human psychology.  Mostly capitalism.

I don't really collect spoons.  But I do have a nice collection of NASA- and space-themed objects, two of which are spoons. 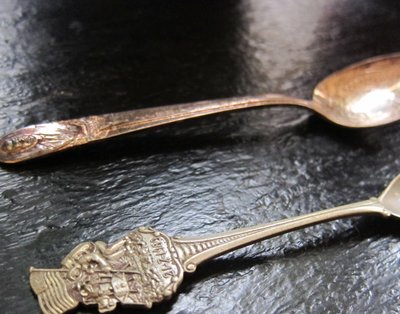 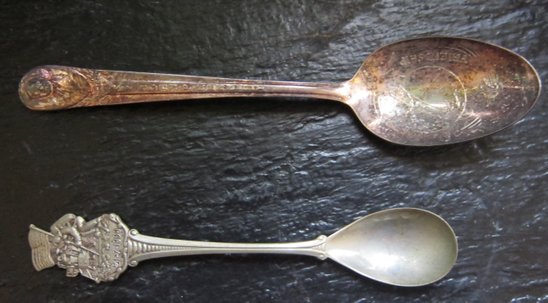 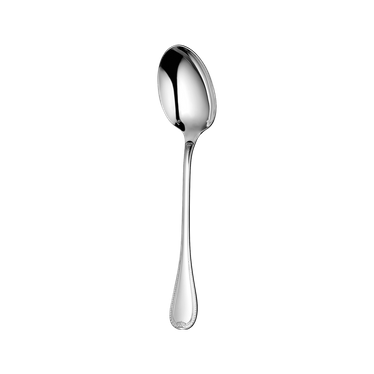 ...why is there a page dedicated to spoons on this website?

The word "spoon" does not appear anywhere in the book Being and Showtime.

ARE YOU SURE THERE IS?

Are you sure there is a page dedicated to spoons on this website?

Are you sure there is a secret, hidden spoon page on this website?

Are you sure you are looking at that page right now?

Are you sure there is a spoon?

Hint: This isn't the only super-secret hidden page on this website.

Everyday, once a day, give yourself a present.  Follow the question marks....